Until these changes Unicode (UTF-16) files were detected by BOMs (0xFFFE for little endian and 0xFEFF for big endian). However, some Unicode files unfortunately lack BOMs, and ExamDiff Pro will now be able to properly deal with such files, by attempting to determine the file's encoding based on an analysis of the file contents.

Note that ExamDiff Pro 4.5 already includes a feature to force Unicode encoding for files without BOMs: the Open buttons in the Compare dialog allow you to manually select file encoding rather than have it be automatically detected, as shown below. Even in version 5.0, this will still remain a useful feature for cases in which you know the intended encoding for a file without a BOM, because it ensures that the files are detected properly. 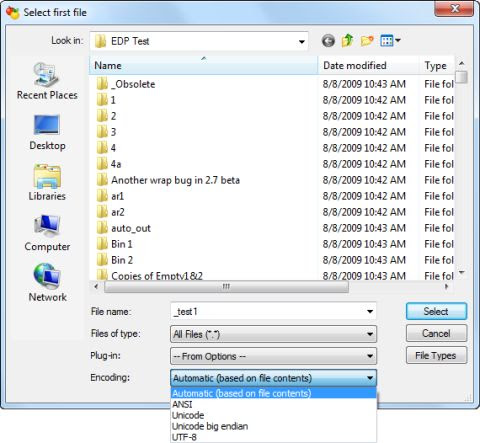