Note: Manual synchronization will be included in the ExamDiff Pro 3.5 beta, which will probably be open to the public within a month.

Let me give an example of a situation that can call for the use of manual synchronization. Take a look at the screenshot below. 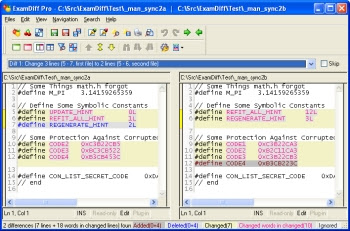 As you can see, lines 6 and 5 (in the first and second files, respectively) are very similar, but have one changed word. Since ExamDiff Pro matches identical lines, rather that intuitively matching lines 6 and 5, the program matches lines 5 and 5, the first different lines that follow the identical blocks. What that does is that all lines that follow are shifted, which makes analysis of the comparison results difficult.

In general, no matter how smart the comparison algorithm is, it sometimes has to be "helped out" by a human. And this is where manual synchronization is needed. Let me show how this new feature improves the results that we described earlier. 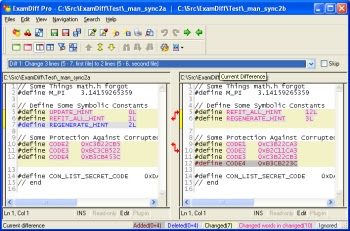 Note that the center splitter in the screenshot is much wider than usual. This is called a synchronizing splitter and can be used to form manual links. The wide splitter can be toggled on and off.

To create a manual link, you must click on the starting point (on the wide splitter) and drag to the ending point. If you need to independently scroll one file, you can now use Alt-Scroll (the mouse wheel or the scroll bar) to do so. The screenshot above shows what manual links look like.

After hitting Re-compare, you would get something like this: 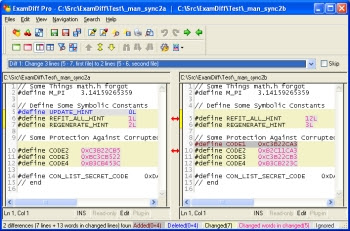 As you can see, all similar lines are now properly matched and the whole comparison view is much cleaner.